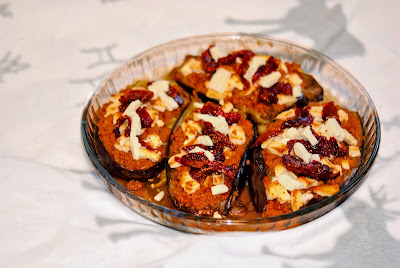 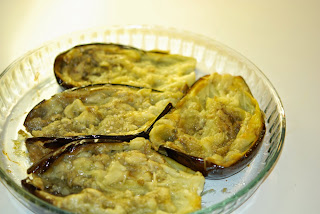 Few weeks ago ESN Jyväskylä organized an international dinner where I tried a lot of tasty food. But especially one was burned in my mind. So I asked the girl, who cooked that meal ,for the recipe and came up with a vegetarian version (many thanks to Kornilia).

After that they are washed again with water, furthermore they have to be squeezed softly so that most of the water comes out. Now spread some olive oil onto the eggplants and put them into some baking form and into the oven at 180°C for about one hour.

While the eggplants are sweating in the oven we can prepare the filling. Therefor the onion and garlic are cut into small pieces and fried in a pan with oil. Afterwards the barley can be added and roasted for a while too. For deglazing we will use the white wine, after the wine has vaporized we will add the vegetable broth. As soon as the vegetable broth also vaporized you can add the tomatosauce and water till the barley is fully covered. The pot is now seasoned with salt, pepper, oregano, dill, 2 tsp. sugar and a pinch of cinnamon. The heat can now be turned back, so that the barley is only simmering. When it gets too dry add some water till the barley is soft.

Now the eggplants should have a crispy skin but a very soft flesh. Turn them around and press them flat with a spoon. Afterwards the barley-filling can be spreaded over the eggplants and the filled vegetables are put into the oven for 30 minutes at 180°C

While the eggplants are baking again, we can cut the feta cheese into small pieces. Further the figs are cut into slices.

As soon as the eggplants were in the oven for further 30 minutes, you can put the feta cheese on them und bake them till the cheese turns goldenbrown.

As a last step you have to fry the cranberries in a pan with a bit of water. When they get soft add 2 tbsp. honey and caramelize the mixture. As it starts bubbling, add the figs and some oil. Take out the eggplants and put the figs on top of them.